Meet Henry Rotich Who Has happily Married a Chinese 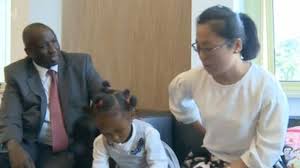 View pictures in App save up to 80% data. Henry Rotich and Xu jing fell in love about a decade ago while attending a meeting in one of the hotels in Nairobi known as Fairmont hotel. According to Xu, it was difficult to her and moreso to convince her parents that she has a lover in Kenya

"We fell in love but it was very difficult at first," Xu Jing said sometimes back. It was no easy even to explain to parents.

Things were not easy on Henry's side also as learning Chinese became a problem to him but this was the only way he can meet Xu family and have a chat with them. Henry stated that it took him sometime for him to learn sign language in order to meet Xu's father. 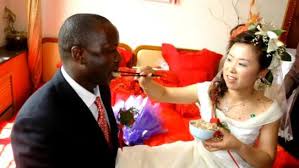 Henry further stated that after some weeks, he had learnt language skills and he was convinced to meet Xu's family in a lunch session.

"Her father didn't say much so I was really worried about what he was thinking, whether or not he even liked the food we were serving him," Rotich stated.

Although they had cultural differences, the couple now leaves in Kenya happily and are blessed with two children. This easily suggest that there is change in how people view each other and this intermarriage has proven it

Content created and supplied by news.ke.Opera News is a free to use platform and the views and opinions expressed herein are solely those of the author and do not represent, reflect or express the views of Opera News. Any/all written content and images displayed are provided by the blogger/author, appear herein as submitted by the blogger/author and are unedited by Opera News. Opera News does not consent to nor does it condone the posting of any content that violates the rights (including the copyrights) of any third party, nor content that may malign, inter alia, any religion, ethnic group, organization, gender, company, or individual. Opera News furthermore does not condone the use of our platform for the purposes encouraging/endorsing hate speech, violation of human rights and/or utterances of a defamatory nature. If the content contained herein violates any of your rights, including those of copyright, and/or violates any the above mentioned factors, you are requested to immediately notify us using via the following email address [email protected] and/or report the article using the available reporting functionality built into our Platform. Read more>>