List Of 5 Kenyan Celebrities Who Face Hate From Kenyan's 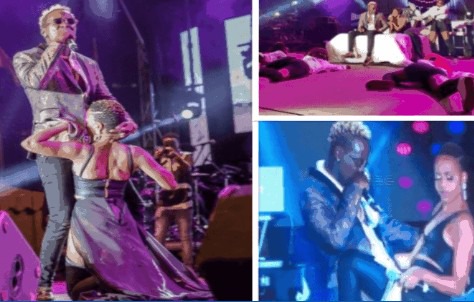 View pictures in App save up to 80% data. List Of 5 Kenyan Celebrities Who Do Face Hate From Kenyan's.

There are several Kenyan celebraties who besides doing what they like most, they do face alot of hate from Kenyan's and this could have been the trend mostly based on their behaviors and character's.

Below is a list of some of the celebrities who do face a lot of hate from their fans or supporters.

At some point, Willy Paul was lashed out to on social media a he was accused of "stealing" Bahati's song.

Huddah Monroe is one of the Celebrities who do lash out at her fans who hate her and this has always found her in tight situation's.

The Starehe Member of Parliament is one of the youthful politicians in the 12th Parliament and he had faced hate at some point in his music career. At some Linus z Kenyans were Angry with president Uhuru Kenyatta for appointing him as a member of the NACADA board.

Kaligraph Jones is also in the list of artists who have always faced hate especially on social media and he also faces hate from Octoppizo.

Ringtone Alex Apoko have always found himself on the wrong side and he do face alot of criticism from his followers. If you go through his social media pages , you will realize the amount of hate he faces from Kenyan's.

Content created and supplied by THECAMERA.Opera News is a free to use platform and the views and opinions expressed herein are solely those of the author and do not represent, reflect or express the views of Opera News. Any/all written content and images displayed are provided by the blogger/author, appear herein as submitted by the blogger/author and are unedited by Opera News. Opera News does not consent to nor does it condone the posting of any content that violates the rights (including the copyrights) of any third party, nor content that may malign, inter alia, any religion, ethnic group, organization, gender, company, or individual. Opera News furthermore does not condone the use of our platform for the purposes encouraging/endorsing hate speech, violation of human rights and/or utterances of a defamatory nature. If the content contained herein violates any of your rights, including those of copyright, and/or violates any the above mentioned factors, you are requested to immediately notify us using via the following email address [email protected] and/or report the article using the available reporting functionality built into our Platform. Read more>>