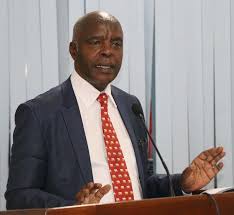 View pictures in App save up to 80% data. The referendum pole is still on. Kenyans in different locations are signing the forms that contain this amendment bill.

The collection of the one million signatures was officially launched at the KICC. President Uhuru and his Handshake partner Hon. Raila Odinga led the exercise.

The Handshake that took place between Mr. Kenyatta and the then opposition leader Mr. Odinga, in 2018 made the country have peace and stability.

The political atmosphere was heated to the extend divisive and ethnic-based politics were witnessed in the country.

Today, governor Kivutha Kibwana of Makueni country has decided to tell Raila to be alert ahead of the 2022 as he earlier declared his intention to be on the ballot box as a presidential candidate.

He told him this,RailaOdinga IEBCKENYA1 The IEBC is half full. Baba has repeated he lost 2007, 2013 & 2017 elections courtesy of electoral injustice due to captured Electoral Commission by bad law and the System. Since this remains the same, HOW WILL A REFERENDUM BE FREE, FAIR and TRANSPARENT?

He meant that the IEBC that Raila is so much relying on has enough commissioners already chosen. This is the same electoral body that denied him a chance to reach state house. If he did not make it in 2007, 2013 and 2017 will he manage now?

Transparency has never worked in the presidential politics of Kenya. Will Raila play his cards well?

Content created and supplied by Saladin123.Opera News is a free to use platform and the views and opinions expressed herein are solely those of the author and do not represent, reflect or express the views of Opera News. Any/all written content and images displayed are provided by the blogger/author, appear herein as submitted by the blogger/author and are unedited by Opera News. Opera News does not consent to nor does it condone the posting of any content that violates the rights (including the copyrights) of any third party, nor content that may malign, inter alia, any religion, ethnic group, organization, gender, company, or individual. Opera News furthermore does not condone the use of our platform for the purposes encouraging/endorsing hate speech, violation of human rights and/or utterances of a defamatory nature. If the content contained herein violates any of your rights, including those of copyright, and/or violates any the above mentioned factors, you are requested to immediately notify us using via the following email address [email protected] and/or report the article using the available reporting functionality built into our Platform. Read more>>