KDF General Who will Never Be Forgotten

Retired General Daudi Tonje's name is perfectly inscribed into the books of history. Anyone undergoing military training in Kenya will never miss to hear the name of this great man who once led the service during the time of the late Retired President Moi. As a man strict to the core and with higher levels of discipline, Gen Tonje has been emulated and praised. In fact, without him, the KDF service would never have been where it is today. 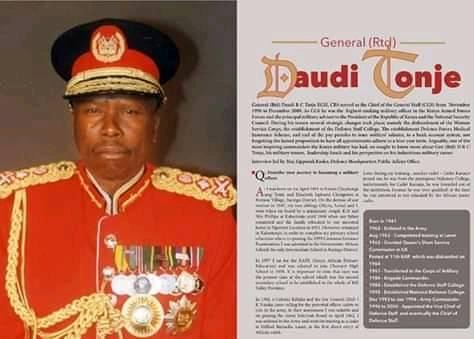 Having took charge of the force in the year 1996, the general steered it and refocused it to achieve the best he had envisioned. Upon leaving the force in the year 2000, he had not only left but also left behind a record achievement that can be pointed at. To appreciate the work of Rtd Gen Tonje, perhaps it is important to imagine what the KDF would have been like had he not come to the helm of its leadership. 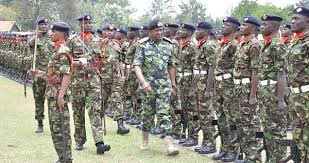 However, the general overturned the tables by bringing some of the most radical and progressive changes within the military. The changes he brought include:

- Ensuring that promotions into ranks in the military were purely based on academic performance. This means that those with good academic qualifications stood a better chance of landing higher positions.

- Paving the way for women to be included in the mainstream army. The general ensured this by disbanding the women corps. In this way, women were included into the army. This was a proof in the general's belief in the ability of women to deliver just like men.

- Changing a rule that banned and prevented women from leading commands in units where men were based. Furthermore, he also ushered in a change that allowed women in the army to marry. The mistaken notion that women couldn't balance work and family was severely trashed by the general as he offered them opportunity to prove otherwise.

- Ensuring that the Defense Staff College and the Defense Forces Medical Insurance Scheme are created. Today, many soldiers are trained and graduate within the country and their health and those of close family members are catered for - thanks to general Tonje.

- Introducing service rotation in the Chief of General Staff of defense office among the three services i.e Kenya Army, Kenya Navy, and Kenya Airforce. This means that if the CDF of the KDF is from Kenya army, the next will be of Kenya Air force, then the next of Kenya Navy. 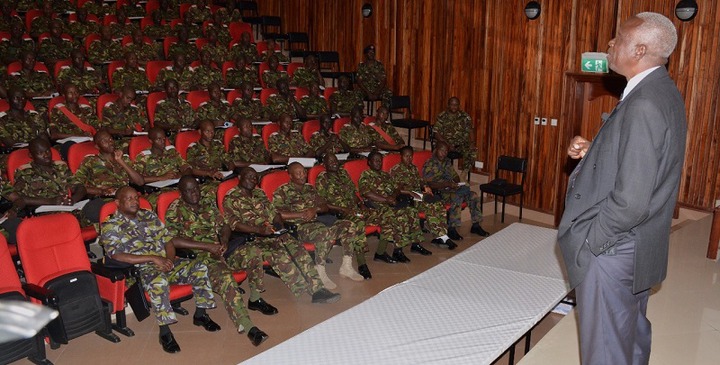 Finally, another great thing that Gen Tonje will be remembered for is introducing payment of soldiers through bank accounts. This saved soldiers from having to stay on long queues at the end of each month. Also, he introduced the retirement age of KDF officers at 62 years and made 4 years the term limits for army, air force, and navy service commanders.

Content created and supplied by hagginsMedia.Opera News is a free to use platform and the views and opinions expressed herein are solely those of the author and do not represent, reflect or express the views of Opera News. Any/all written content and images displayed are provided by the blogger/author, appear herein as submitted by the blogger/author and are unedited by Opera News. Opera News does not consent to nor does it condone the posting of any content that violates the rights (including the copyrights) of any third party, nor content that may malign, inter alia, any religion, ethnic group, organization, gender, company, or individual. Opera News furthermore does not condone the use of our platform for the purposes encouraging/endorsing hate speech, violation of human rights and/or utterances of a defamatory nature. If the content contained herein violates any of your rights, including those of copyright, and/or violates any the above mentioned factors, you are requested to immediately notify us using via the following email address [email protected] and/or report the article using the available reporting functionality built into our Platform. Read more>>