How Moi's Wife Suffered Before Her Death In 2004 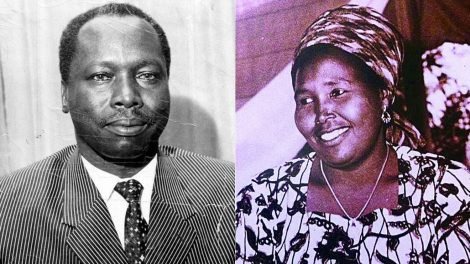 Former President Daniel Moi's wife Lena Moi, really suffered before she died in July 2004. According to reports, the former teacher was allegedly treated badly after she finalized her divorce with Moi in1979.

After the annulment of their marriage, Lena left the Vice President's official residence at Kabarnet Gardens in Nairobi and settled at Kabimoi home in Eldama Ravine where she led a quite life.

For most of her life Lena was only known at her Kabimoi village where she lived a rural-woman's life with no means of transport. For instance, during the burial of Ibrahim Chege, the husband to her daughter Doris, Lena took a Matatu from Eldama Ravine to Nandi Hills to attend the burial ceremony.

"She had no problem using a matatu" a family friend told Sunday Nation. By the time of her death Lena's bedroom had been shifted to the sitting room because the roof was leaking.

Content created and supplied by jeffhubcreator.Opera News is a free to use platform and the views and opinions expressed herein are solely those of the author and do not represent, reflect or express the views of Opera News. Any/all written content and images displayed are provided by the blogger/author, appear herein as submitted by the blogger/author and are unedited by Opera News. Opera News does not consent to nor does it condone the posting of any content that violates the rights (including the copyrights) of any third party, nor content that may malign, inter alia, any religion, ethnic group, organization, gender, company, or individual. Opera News furthermore does not condone the use of our platform for the purposes encouraging/endorsing hate speech, violation of human rights and/or utterances of a defamatory nature. If the content contained herein violates any of your rights, including those of copyright, and/or violates any the above mentioned factors, you are requested to immediately notify us using via the following email address [email protected] and/or report the article using the available reporting functionality built into our Platform. Read more>>