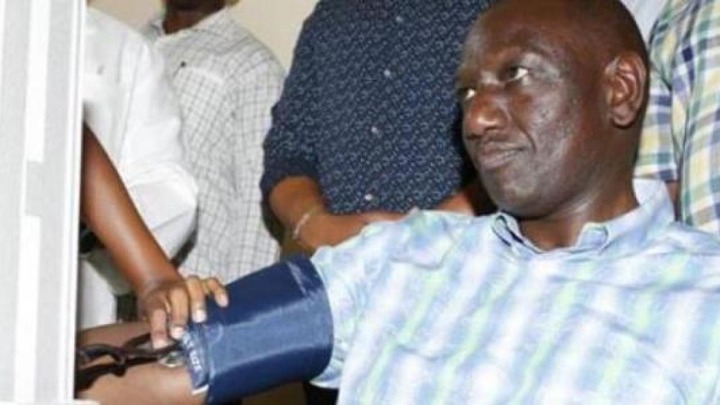 Deputy president William Ruto has been on a four days’ trip to Dubai in what was termed as a private business-cum-family vacation. He left the country on Wednesday evening and returned yesterday. He was accompanied by his wife Mama Rachel Ruto, his children and former Mombasa senator Hassan Omar Sarai. The Standard tried to get a straight statement from Ruto’s Communication Director Emmanuel Tallam but it reported that he neither answered their calls nor replied their messages. The de facto Tangatanga Digital Director Dennis Itumbi was not helpful either.

It was ODM Director of Communications Philip Etale who took to twitter to allege that deputy president William Ruto’s main reason of jetting out to Dubai was for a doctor’s appointment. He opined that the DP was unwell and had gone to see a doctor. Etale dismissed the sentiments that Ruto had taken mama Rachel to Dubai to celebrate her birthday terming them a diversionary tactic.

“Dear Itumbi, after what is purported to be a birthday treat, someone will tomorrow go to a top class hospital for his appointment with the doctor. And then atapewa sindano kiupooole. End of story,” shared Philip Etale on twitter. 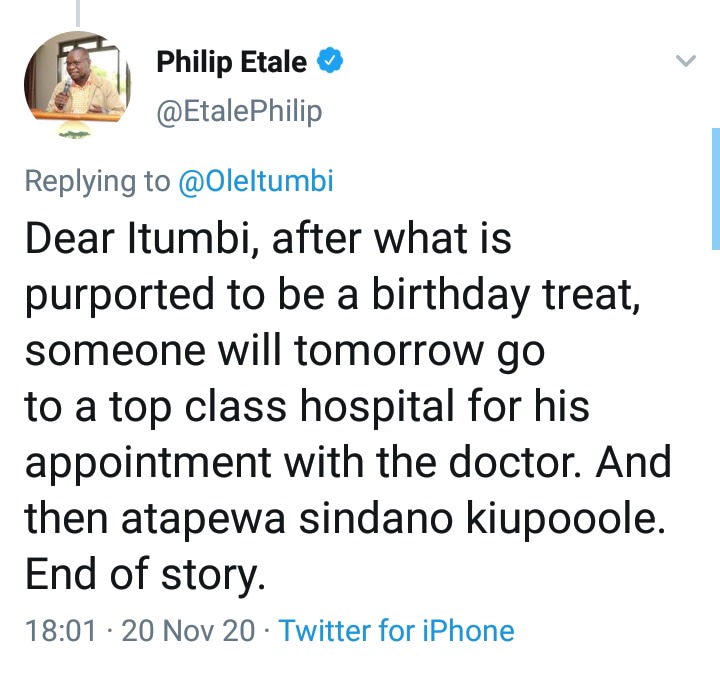 Dennis Itumbi who they were engaging with at that moment did not confirm nor deny those claims raising eyebrows from netizens.

Renown journalist Abuga Makori has come out to allege that he has facts that deputy president William Ruto has a mild leukemia and is currently on treatment. Makori went ahead to wish the DP quick recovery while submitting that such information was being concealed by Tangatanga.

“Tangatanga will be first to tell us how Raila is sick, how they will send him to Bondo. They won't say Mzee Kibaki and many of us are struggling. Or even, that DP Ruto is actually suffering from MILD LEUKEMIA and he's on treatment. I wish him quick recovery. He'll be okay,” shared Abuga Makori EGH, MBE on twitter. 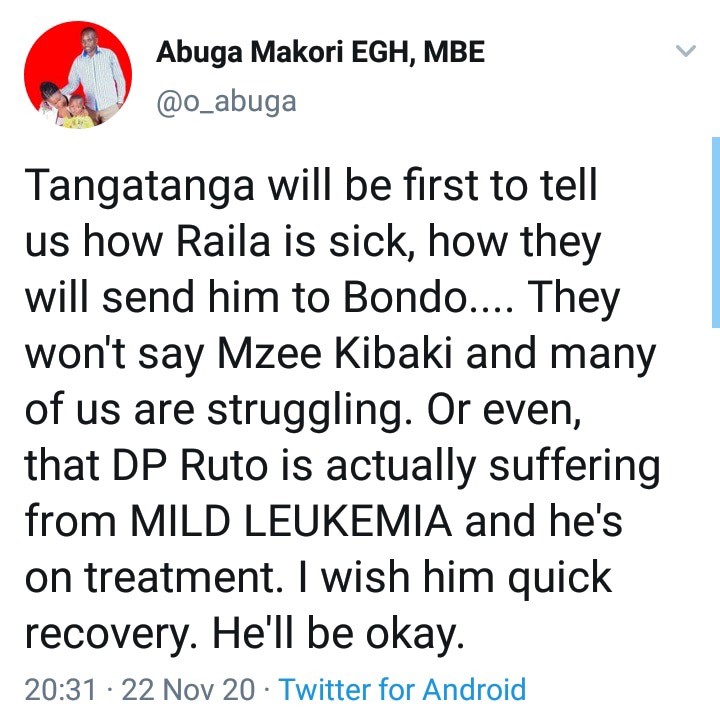 Makori also affirmed that it was President Uhuru Kenyatta himself who cleared deputy President William Ruto to fly to Dubai for cancer treatment and not Joseph Kinyua, the head of public service.

“It's now not a secret, DP Ruto is battling with Mild Leukemia. This is why he's out of the country for treatment. He was cleared by President Uhuru Kenyatta and NOT Joseph Kinyua. Quick recovery,” added Abuga Makori EGH, MBE in another tweet. 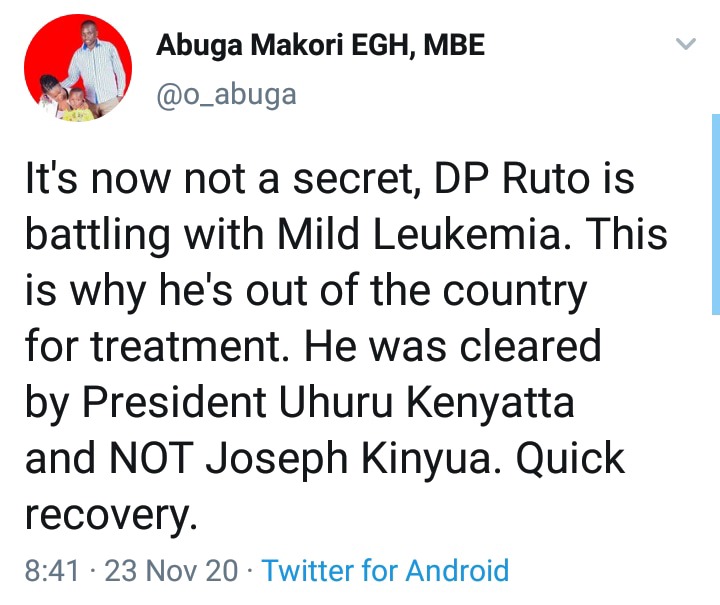 According to the website medicinenet.com, Leukemia is a cancer of blood or blood-forming cells and therefore sometimes referred to as blood cancer. The cite notes that the exact causes of leukemia are not known however, identified risk factors include radiation exposure, certain chemotherapy for cancer, smoking, family history of leukemia, and exposure to certain chemicals such as benzene.

Content created and supplied by BrightonM.Opera News is a free to use platform and the views and opinions expressed herein are solely those of the author and do not represent, reflect or express the views of Opera News. Any/all written content and images displayed are provided by the blogger/author, appear herein as submitted by the blogger/author and are unedited by Opera News. Opera News does not consent to nor does it condone the posting of any content that violates the rights (including the copyrights) of any third party, nor content that may malign, inter alia, any religion, ethnic group, organization, gender, company, or individual. Opera News furthermore does not condone the use of our platform for the purposes encouraging/endorsing hate speech, violation of human rights and/or utterances of a defamatory nature. If the content contained herein violates any of your rights, including those of copyright, and/or violates any the above mentioned factors, you are requested to immediately notify us using via the following email address [email protected] and/or report the article using the available reporting functionality built into our Platform. Read more>>