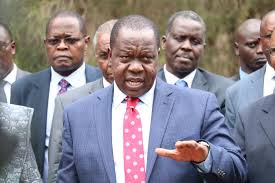 View pictures in App save up to 80% data. The BBI referendum officially kicked-off on Wednesday at the KICC. President Uhuru Kenyatta and his Handshake partner Hon. Raila Odinga led the exercise to collect the one million signatures that are meant to support the amendment bill for gazetting.

It is claimed that many political leaders gave their unreserved support to the BBI document to see it implemented in the country.

However, issue continue to emerge each day on the legitimacy of the amendment bill. It is believed that unacceptable means are being used to collect these signatures.

Today, Hon. Caleb Kositany alleged this, the urgency in collecting BBI signatures is at a desperate level, chiefs have the forms & one copy of the bill per location.So how are the people going to read this bill?.Sisi sio wa kusomewa na mutu.If the chiefs return blank forms, don't sack them.

Various amendment bills have been scattered in different locations so as to confuse Kenyans and just say YES without understanding other bills of the amendment bill.

Some Kenyans have also alleged that the form is accompanied with some cash 500/= to easily lure the poor Kenyans who may be against it.

Oloitiko a netizen claimed this, in my Oloililai location, the chief showed me the forms plus 500/ he was given by Kjd County Commissioner; unfortunately, the citizenry have refused to sign. Hata Hustlers Clerk akisign, hiyo ni shida yake na mdosi wake.

Matiangi should now take a stern action on the chiefs and if so could he be dealing with the chiefs or it was an order from above ?

Content created and supplied by Saladin123.Opera News is a free to use platform and the views and opinions expressed herein are solely those of the author and do not represent, reflect or express the views of Opera News. Any/all written content and images displayed are provided by the blogger/author, appear herein as submitted by the blogger/author and are unedited by Opera News. Opera News does not consent to nor does it condone the posting of any content that violates the rights (including the copyrights) of any third party, nor content that may malign, inter alia, any religion, ethnic group, organization, gender, company, or individual. Opera News furthermore does not condone the use of our platform for the purposes encouraging/endorsing hate speech, violation of human rights and/or utterances of a defamatory nature. If the content contained herein violates any of your rights, including those of copyright, and/or violates any the above mentioned factors, you are requested to immediately notify us using via the following email address [email protected] and/or report the article using the available reporting functionality built into our Platform. Read more>>