He Is Very Shameless: See What a Guy Wrote In A Letter To His Girlfriend

Anyone would feel ashamed and embarrassed with the current level of depreciated seriousness that students in Nigeria are now taking their studies, to the point that it has now become very difficult for an average Nigerian youth to compose a correctly type-setted and punctuated letter, a love letter at that.

During my days in primary school, I could remember that times when young boys would write love letters to girls in the class and their grammars despite just beginning to learn English were even better than the one that would be seen in the letter shared in this article.

Not only does the letter lack the necessary spelling or punctuation, it also lacks the current use of tense, address, salutations and other features that are compulsory in an informal letter.

As said earlier, he was trying to address the letter to his girlfriend and also promise her all the goodies he would provide her should they every get married and be able to continue their relationship, he made a lot of promises actually, he only lacked the necessary writing skills to convey his message.

Personally, I have seen countless varieties of letters written by people, even those addressed to a bank manager for a position in a bank, which lacked the basic features that are expected to even be known by primary school students. 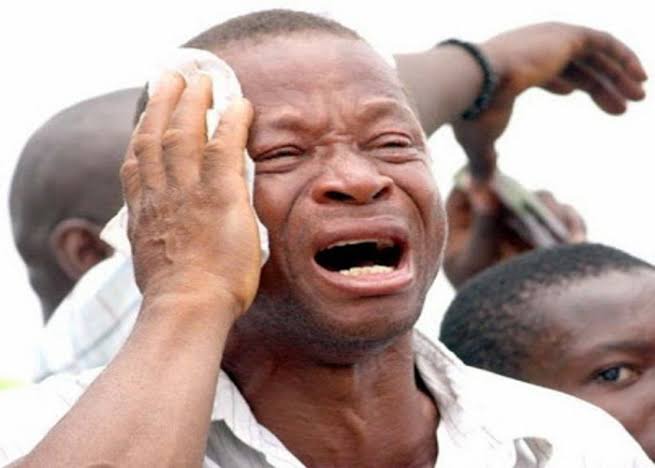 View pictures in App save up to 80% data. An Illustrative picture of a man crying

But anyone that reads this letter should actually cry for the guy, because it is a shame on anyone who is old enough to write a love letter to not be able to write well.

In this letter, the sole purpose for it could not be determined as the guy refused to include the Title and also did not make any claims or include any information as to why the letter is being sent. View pictures in App save up to 80% data. In the opening sentence, he wrote that: "My chicken bones, I love you. When I think you, I happy too much." Though this would make a lot of sense when it is properly interpreted and the mistakes are understood, it does not represent the pleasantries that are expected to open a letter.

In the content, another sentence that caught my attention is the one where he wrote: "You are my spinach and fish oil." It kept me laughing and wondering why a lot would be someone's Spinach and Oil as if he was planning on turning her into a food recipe.

Below is a full view of the letter: He also decided to conclude his letter without any formal regard, he just wrote his personal number on one side and wrote the customary 'Yours Faithfully' while adding his name to be 'Akinpelu Ayobami'.

No one is above mistake truly, but everyone will agree that this letter is not as a result of a mistake, it was rather due to the inability of the guy to construct a good letter for his girlfriend and why I believe he is very shameless.

What do you think of this letter?

Do you think he only made mistakes while writing the letter or he does not know how to write one?

What would you think if you were the lady that received the letter?

Content created and supplied by OptimumWoleh.Opera News is a free to use platform and the views and opinions expressed herein are solely those of the author and do not represent, reflect or express the views of Opera News. Any/all written content and images displayed are provided by the blogger/author, appear herein as submitted by the blogger/author and are unedited by Opera News. Opera News does not consent to nor does it condone the posting of any content that violates the rights (including the copyrights) of any third party, nor content that may malign, inter alia, any religion, ethnic group, organization, gender, company, or individual. Opera News furthermore does not condone the use of our platform for the purposes encouraging/endorsing hate speech, violation of human rights and/or utterances of a defamatory nature. If the content contained herein violates any of your rights, including those of copyright, and/or violates any the above mentioned factors, you are requested to immediately notify us using via the following email address [email protected] and/or report the article using the available reporting functionality built into our Platform. Read more>>