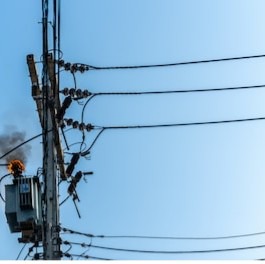 View pictures in App save up to 80% data. It has become a nightmare for midodo residents as they stay without lights for 7 months now due to brake down of electric transformer.

The shopping center is located to Tarbo Kiminini road near Brigadier market in Bungoma county, where residents are annoyed with Kenya Power for not replacing the damaged transformer in early April this year.

Most of the residents in this shopping center depends on electricity which enable them to run there business.

In 5/5/2020, the residents reported the issue to Soysambu Mitua Word MCA Stephen Wamalwa who is also the area MCA to go to KPLC company to represent there issue.

In 24/7/2020, one of the residents returned to the MCA representative Mr Mahel to go and ask the MCA which step did He take after they address there issue to Him. Because nothing has been done so far.

On 26/7/2020, Mr Mahel returned the report to the residents that the MCA has told Him that He has tried to go and convince the MP Mr David Iseli Simiyu to go to KPLC company and address the issue.

Later the MCA told the residents that when the MP got to company, KPLC Manager told Him that they lack transformers into the store.

But Early this month, the residents say that they have been seeing some of the Electrical Engineer surveying the market claiming that they want to find the cause of transformer brake down. But so far residents are still struggling as there is nothing done.

Content created and supplied by Adams502.Opera News is a free to use platform and the views and opinions expressed herein are solely those of the author and do not represent, reflect or express the views of Opera News. Any/all written content and images displayed are provided by the blogger/author, appear herein as submitted by the blogger/author and are unedited by Opera News. Opera News does not consent to nor does it condone the posting of any content that violates the rights (including the copyrights) of any third party, nor content that may malign, inter alia, any religion, ethnic group, organization, gender, company, or individual. Opera News furthermore does not condone the use of our platform for the purposes encouraging/endorsing hate speech, violation of human rights and/or utterances of a defamatory nature. If the content contained herein violates any of your rights, including those of copyright, and/or violates any the above mentioned factors, you are requested to immediately notify us using via the following email address [email protected] and/or report the article using the available reporting functionality built into our Platform. Read more>>