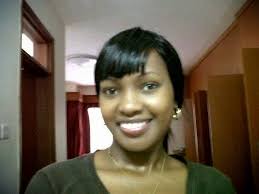 View pictures in App save up to 80% data. Veronica Wanjiru is ex wife to the late Fidel Odinga. She is one woman who has respected the Odinga as we the Fidel family years after they devorced with Fidel Odinga with no bad feeling about the powerful family.

Veronica Wanjiru and the late Fidel Odinga devorced way back in 2011 due to irreconcilable differences. Their marriage which happened in 2007 however was not blessed with a children and it's not in the public domain whether it was by choice or just circumstances.

It's something that Raila Odinga elder brother Oburu Odinga spoke about at length during the burial of Fidel Odinga in 2015. According to him Veronica refused to sire children with Fidel something that Veronica rubbished and said children comes from God and no human being has the powers to give children to anybody.

Veronica however never took her devorce with Fidel negatively owing she continued to be his friend before he died. He even attended a fundraising in Kibra to contribute fund Fidel programmes that he was doing in Kibra after he died. Nobody however ever spoke on the cause of their devorce and even Fidel died without speaking about it.

Fidel however before his death had remarried an Eritrean Woman one Lwam Bekelle who together were blessed with one lovely son. He died however before seeing his son grow. May his Saul rest in eternal peace.

Veronica Wanjiru has concentrated in her private business and kept her life off public limelight. Much details about her after her devorce with Fidel have remained scanty. She is not actively in social media and has avoided discussing her relationship with Fidel. This has enabled her succeed owing she has dwelled in positivity only.