BBI Suffers Another Blow as Bad News is Reported Again 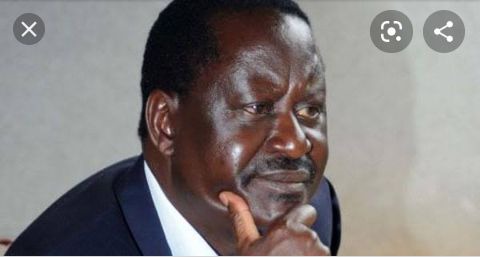 While other regions are getting massive support during the Collection of signatures,KANU chairman Gideon Moi and his Chama Cha Mashinani counterpart Isaac Ruto are facing a hard task in collecting signatures in Rift valley as a section of leaders has vowed that none should collect signatures on the area they are ruling.

According to the Daily Nation,Nandi Governor Stephen Sang has said that he will not allow Collection of signatures in his county. 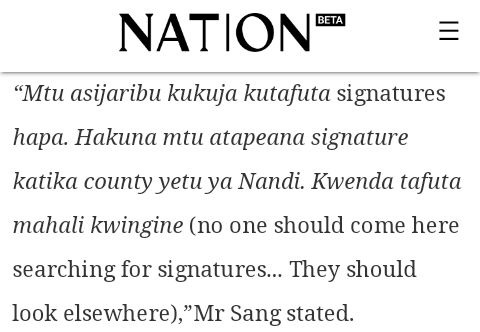 View pictures in App save up to 80% data. Govenor Sang added that the government should prioritise the fight against Covid-19 which is killing Kenyans and not the Building Bridges Initiative report.

Elgeyo Marakwet Senator Kipchumba Murkomen also said Building Bridges Initiative referendum will not happen even if he doesn't know how it won't happen. 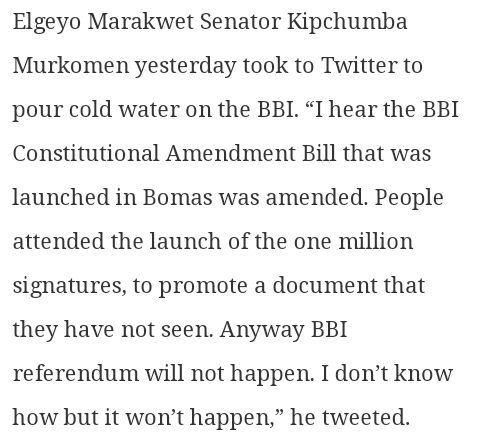 This shows the Building Bridges Initiative report will suffer a major drawback especially in the Rift valley region.

Content created and supplied by Omuga-ke.Opera News is a free to use platform and the views and opinions expressed herein are solely those of the author and do not represent, reflect or express the views of Opera News. Any/all written content and images displayed are provided by the blogger/author, appear herein as submitted by the blogger/author and are unedited by Opera News. Opera News does not consent to nor does it condone the posting of any content that violates the rights (including the copyrights) of any third party, nor content that may malign, inter alia, any religion, ethnic group, organization, gender, company, or individual. Opera News furthermore does not condone the use of our platform for the purposes encouraging/endorsing hate speech, violation of human rights and/or utterances of a defamatory nature. If the content contained herein violates any of your rights, including those of copyright, and/or violates any the above mentioned factors, you are requested to immediately notify us using via the following email address [email protected] and/or report the article using the available reporting functionality built into our Platform. Read more>>