All eyes on next round of trial run for e-buses 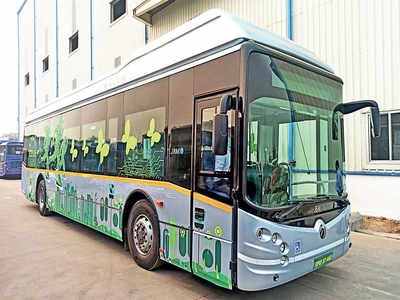 After concluding a “successful” trial run of

, the Bangalore Metropolitan Transport Corporation (BMTC) has started examining another electric bus, which is manufactured by JBM Group.

Its performance on Bengaluru’s roads over the next two weeks will play a key role as the Gurugram-headquartered company is the lowest bidder for supplying 90 electric buses to the transport corporation.

Officials were happy about the performance of electric bus provided by Olectra, which clocked an average of 20 kmph without any breakdowns. The bus can cover a distance of about 200 km a day with a single battery charge for about three hours on different roads, including flyovers. Like any electric car, the bus automatically turned off the power when it stopped at the traffic signals.

The firm, however, lost out to JBM in the bids floated by the BMTC for the procurement, operations and maintenance of 90 electric buses early this year. The financial bids were opened early this month. JBM had participated along with

NTPC Vidyut Vyapar Nigam , a PSU under the Union Power Ministry, in the tenders. It’s learnt that the BMTC is currently negotiating with the lower bidder to further reduce the cost. The final decision is expected to be taken by the BMTC Board, which will meet in December.

Since JBM Group is also the lowest bidder for supplying 90 buses, we will be examining the performance of its electric bus stringently. ­

“The electric bus -- given by JBM -- clocks about 120-km on a single battery charge. Since the company is also the lowest bidder for supplying 90 buses, we will be examining the performance of its electric bus stringently. The bus can do upto 80kmph but we are not able to run it beyond an average of 20-25-kmph in the city due to multiple signals and the vehicular traffic,” K Santhosh Babu, Director (IT) at BMTC told BM.

As per the plan, these 90 electric buses will be used to provide first and last mile connectivity in different Metro stations. The project is partly funded by Bangalore Smart City Pvt Ltd. These 9-metre long buses, called mini-buses, have a seating capacity for 31 passengers. If all goes well, electric buses might hit the roads in six months.

As per tenders, the BMTC has followed

OPEX model to purchase the buses. While the manufacturer is expected to take the full responsibility of maintaining the buses as well as providing a driver, the BMTC has guaranteed 200 km a day of operations per bus along with a conductor. In turn, the manufacturer gets a fixed amount per kilometre of operations. If the ridership is low, the BMTC stands to lose. Currently, most of the diesel buses are running into a loss.