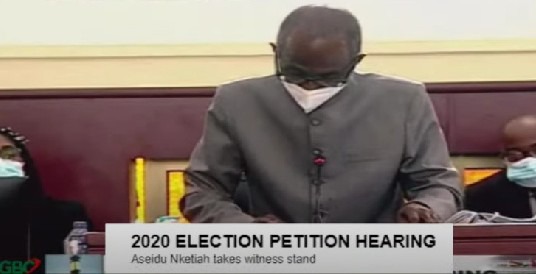 The general secretary of NDC Johnson Asiedu Nketia who is witness for the petitioner in the Election Petition Case caused some humour in the Supreme Court on 29th January, 2021, when he was being cross examined.

After presenting his witness statement to the court on Thursday, January 28, 2021, the court proceeded with the cross examination, Lawyers of the 1st and 2nd respondents took turns investigating the statements as presented.

Questions were asked by Justin Amenuvor about miscalculations of figures as far as total valid votes presented by the petitioner were concerned. He argued that the total valid votes as captured on all forms signed by their agents will amount to 1,196,751 and not 1,236,940 as written on the form.

Asiedu Nketia who is known for his humorous nature created some humour in a tensed proceedings by requesting for a calculator to enable him add figures to make his case because he could not remember the total figure while being cross examined by lawyer for the 1st Respondent.

Ghanaians as we know will make fun of every situation, someone has hilariously made a funny video out of it.

Clink link below to watch video