5 REASONS Why you Dont have to fear or fight the Devil/demons. 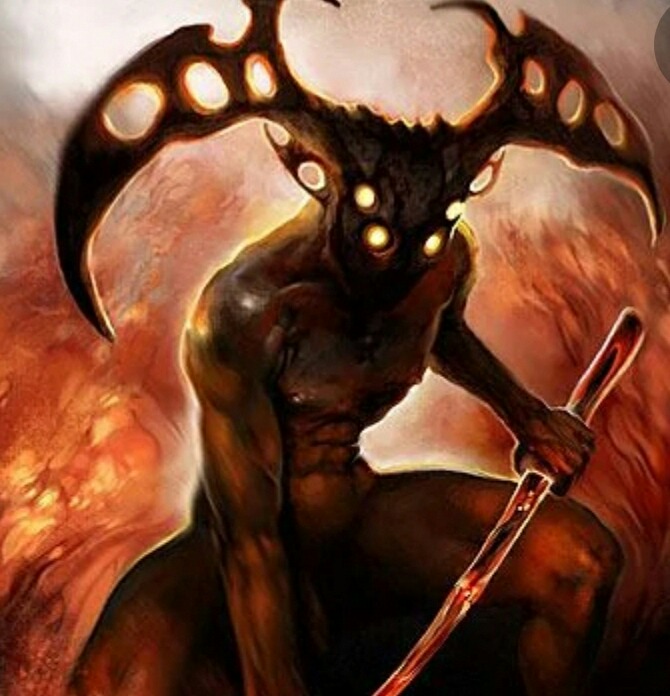 First of all, we must understand that the devil or Satan is one of the fallen angels known as Lucifer until he perverted himself and became the devil, the devil was Judged already and awaiting everlasting destruction in the lake of fire. In order not to go down alone, he decided to deceive man the first created beings (Adam and Eve).

The devil deceive them to disbelief God and believe him rather and by doing so, they will die spiritual thus be separated from God, be judged and then surfer the same fate that awaited himself and other fallen angels.

The scriptures gave some attributes of the devil. And this includes the following :

📖“And he laid hold on the dragon, that old serpent, who is the Devil, and Satan, and bound him a thousand years,”

2. The accuser of the brethren

📖“And I heard a loud voice saying in heaven, Now is come salvation, and strength, and the kingdom of our God, and the power of his Christ: for the accuser of our brethren is cast down, who accused them before our God day and night.”—

🗣️ Now you know who the devil is, let's talk about the 5 reasons why you must not fear or fight him.

1. THE EARTH IS NOT FOR THE DEVIL

🗣️The earth is no Jurisdiction of the devil, he only occupied it illegally because he has lost his former estate. The earth is for humans, made purposely to be dominated by humans. 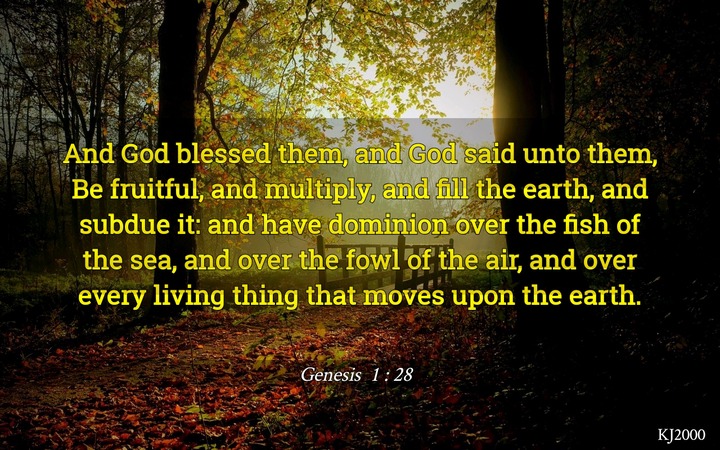 🗣️ The sacred writing above proves that man has been empowered or instructed to dominate the earth and subdue it.

With this power, no other element, spirit or God himself can do anything on earth without the approval of man. Never. Man is the custodian of the earth. What man permitted happen. What he forbids is forbidden.

God does not usurp his will on man, and neither Satan or the devil can.

Some might say but the devil is spirit, granted but man is spirit too, and also having a body or flesh which has not, and not forgetting that the earth is a physical environment, thus where man becomes more powerful.

Any evil spirit that can work against man can only do it through another man. The devil can never do anything on earth by himself. So let this be established in your mind that the earth is yours so take dominion over it.

¹ Now the serpent was more subtle than any beast of the field which the LORD God had made. And he said unto the woman, Yea, has God said, you shall not eat of every tree of the garden?

² And the woman said unto the serpent, We may eat of the fruit of the trees of the garden:

³ But of the fruit of the tree which is in the midst of the garden, God has said, You shall not eat of it, neither shall you touch it, lest you die.

⁴ And the serpent said unto the woman, You shall not surely die:

⁵ For God does know that in the day you eat thereof, then your eyes shall be opened, and you shall be as gods, knowing good and evil.

🗣️But someone might asked, did the devil not said the truth? What the devil said looks as truth to the canal minded person, but the truth is that man died that day. Their spirit died immediately and death entered the soul and the body. That was why the Bible said in adam all dies but in christ all will be made alive. 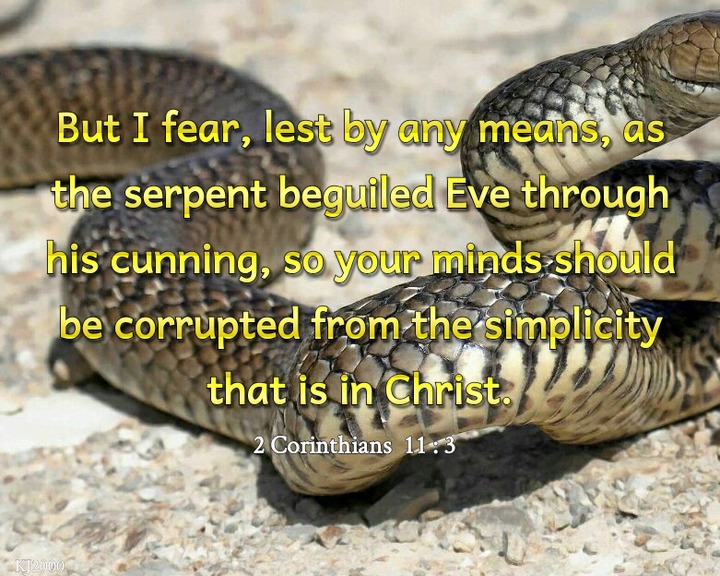 The greatest weapon of the devil is deceit nothing else. See this last prove of reason 2.

🗣️ The word wile there👆 is schemes, lies or deceit

¹² For we wrestle not against flesh and blood, but against principalities, against powers, against the rulers of the darkness of this world, against spiritual wickedness in heavenly places.

¹³ Therefore take unto you the whole armor of God, that you may be able to withstand in the evil day, and having done all, to stand.

¹⁴ Stand therefore, having your loins girded about with truth, and having on the breastplate of righteousness;

¹⁵ And your feet shod with the preparation of the gospel of peace;

¹⁶ Above all, taking the shield of faith, with which you shall be able to quench all the fiery darts of the wicked one.

¹⁷ And take the helmet of salvation, and the sword of the Spirit, which is the word of God:

🗣️ Check the weapons well, they has absolutely nothing to do with phisical weapon, only get knowledge on the following : Righteousness, faith, salvation and word of God and you are free from the hands of the devil.

﻿3. WITH FAITH NOTHING CAN IMPOSSIBLE

Faith is the greatest weapon per my opinion that can protect you against any one using evil spirit.

¹ Now faith is assurance of things hoped for, proof of things not seen.

² For by this, the elders obtained testimony.

³ By faith, we understand that the universe has been framed by the word of God, so that what is seen has not been made out of things which are visible.

🗣️Faith is beyond phisical analysis or science; assurances of non emperically verifiable things. It does not make sense yeah but is true.

📖 “Jesus said to him, “If you can believe, all things are possible to him who believes.””

4 THE DEVIL HAS BEEN DEFEATED ALREADY

🗣️In actual fact, the devil is not powerful as people thought, he has been rendered powerless by our Lord and saviour Jesus christ which is the word of God. So why fear him or engage him for a fight again? If you do that you are doing it in unbelieve, because you thought he is yet to be defeated or it means you still value his negligible strength. The devil is using pastors on pulpits to elevate himself as if he is powerful. Pastors normally organize 30 days fasting just to fight demons or devil, come on this is weak, why not the prayer to thank God and christ for the victory.

📖“And having spoiled principalities and powers, he made a show of them openly, triumphing over them in it.”

📖“Since then the children are partakers of flesh and blood, he also himself likewise took part of the same; that through death he might destroy him that had the power of death, that is, the devil;”

🗣️Through the death and ressurection of christ, the power of the devil has been destroyed, that through knowledge in christ we will be victorious in every thing without the devil in mind. Only know and confess that the devil has been disarmed of his powers and can't do anything to you. Don't engage him in any fight, he is a non-entity as far as christ is concerned, only magnify christ in your mind.

﻿The child of God defiantly has God's DNA. and has a capability to operate as God's but he or she must first know that capability is inborn. Is about time we start practicing these capabilities, declearing what happens to us and forbidding that which must not.

You will understand this better in you read my article: 5 Reasons why you shouldn't be afraid of Death. It explain it better. But check this few scripture that confirms this.

📖“I have said, You are gods; and all of you are children of the most High.”

³⁴ Jesus answered them, Is it not written in your law, I said, You are gods?

³⁵ If he called them gods, unto whom the word of God came, and the scripture cannot be broken; 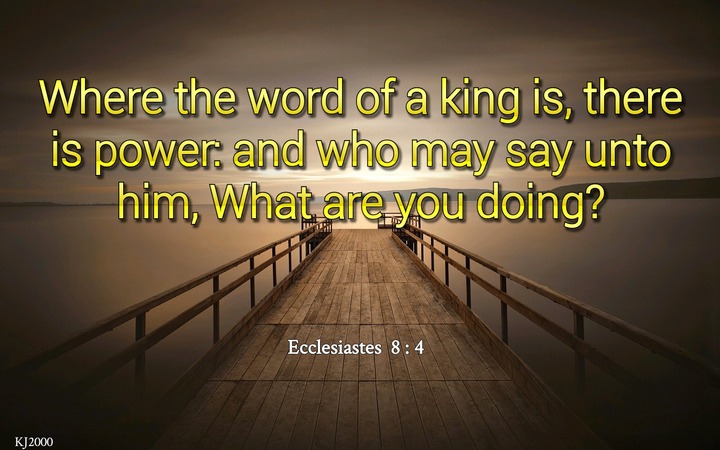 🗣️He has made us to reign as kings and our words carries power, and the devil can not stand it so don't ever fear the devil or any image of him. No discrimination of the devil should threaten you. No way.